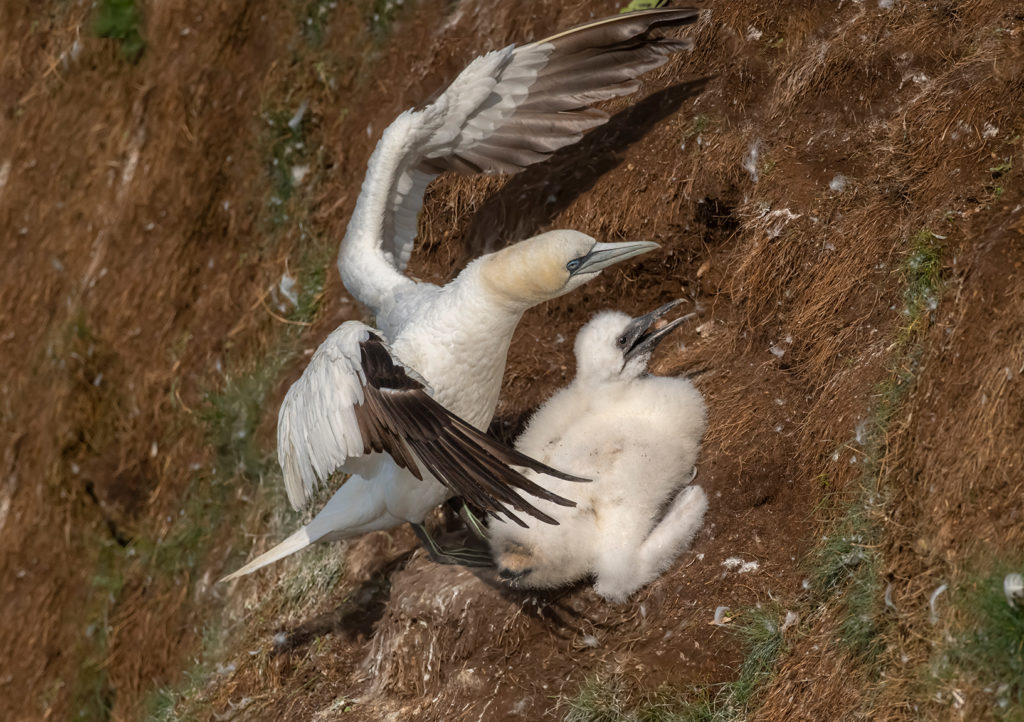 I decided to come up to Troup Head, an RSPB reserve in Aberdeenshire which has the largest Mainland, U.K., Gannet colony. I have been here a number of times before but never in August.

I love Troup Head. It’s funny, when you arrive at the reserve for the first time, you have no idea of what you are walking into, and then suddenly, when you get near the gate to the reserve, it is like a sudden onslaught to the senses, the smell, the noise and a sky full of birds.

The cliffs where the Gannets nest are very steep, so it’s not for the fainthearted, or anyone with vertigo. It was a clear bright day, initially not too sunny. It was not very busy apart from a guy, who was putting up a new camera to monitor the birds.

When we arrived, I walked to the end of the reserve and was saddened to see a Gannet trapped in the barbed wire fence, bleeding and in distress. I told the guy on the cliff, who managed to free it, but thought that it was too badly hurt and would not survive.

It was brilliant to see Guga’s (baby gannets), a first for me, on the cliffs, though most of them were lower down on the cliffs and were fairly well hidden by the adults. Gannets only lay one egg a year and are only rarely left alone by their parents. Chicks that are left unattended are often attacked and killed by other gannets

I found a good spot where I could see them in two different positions and I set up my camera. Considering the adult Gannet is such a stunning bird, with its bright blue eye and the soft yellow around its neck. The Guga is not quite what you would expect. It is like a cotton ball ball with an old black wrinkled head. In some ways, it looks quite pre-historic. I must have stood photographing for 3 and a half hours.

The weather was fantastic, very sunny but with enough cloud most of the time, so the whites of the birds weren’t burning out, but bright enough that even when using my 800/1000mm lens, I could have the Iso at 800 and still get very fast speeds to enable me to capture the action. The Guga’s were so much fun to watch, most of the time they were mimicking the adults or being fed. I couldn’t leave without getting a few photos of the beautiful adult Gannets.
I love the shot which shows the mimicking of the adults. Another favourite is of two adults on the cliff edge, the sea highlights the beautiful yellow of the neck their bright blue eyes